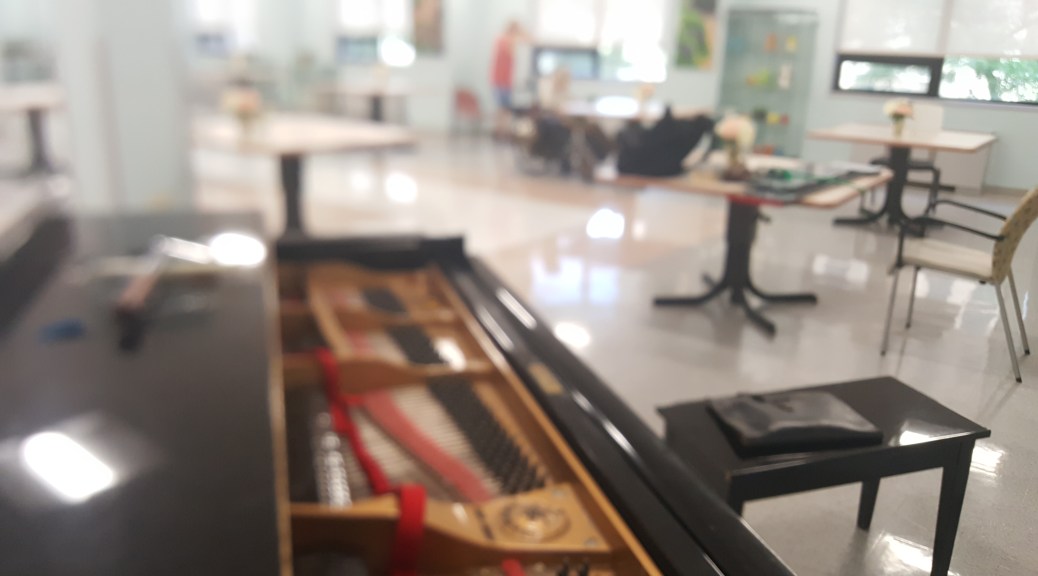 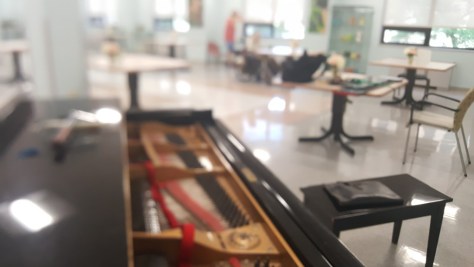 Today’s tuning adventure took me to a world in which few of us would ever want to be: a “retirement center”, “old folk’s home”, or “nursing home.” Whatever the signs say outside these places, in them ancient humans spend most of their days in solitude, surrounded by others in solitude, communicating with each other little, silent in their own thoughts (or just silent).

I took the elevator to the third floor to find the large common room and piano. The doors opened and the scene lay bare: the walls were stark white, the lights were florescent, and the air smelled of freon and bleach.

My ears were greeted with a sound that reminded me of a windup metronome on a slant – a tip-tap, tip-tap that wasn’t even. One of the residents, gripping his walker white-knuckled, was standing a few inches from a window, staring outside and walking in place, perhaps imagining he was actually on a walk. His feet did not shuffle – they lifted an inch or so off the ground and he rocked back and forth. Tip-tap, tip-tap. I immediately named this gentleman “Henry.”

I greeted those I passed with a smile and a simple sentence: “Hi, I’m here to tune the piano. I’ll be right over here.” Most responded by staring wide-eyed; a few grunted their greeting back, their minds a shell of what they once were.

To begin my routine of setting up the piano, I took off the music stand and placed it on a table nearby. Before I could reach for my tools, I received my first protest: “NO!!” Startled, I looked up to see “Mabel” inching her way towards me in her wheelchair. She had a scowl on her face, and no sounds came from a mouth that was slowly moving as if trying to speak. I could tell that she was uncomfortable with change, and her environment was changing. I smiled at her and said, “It’s OK, I’m just going to put this here to tune. I’ll put it back shortly”, keeping my hands moving. She started shaking her head and dropped it slowly down to her chest. A few seconds later, still shaking her head, she managed the sentence, “it’s … never been done before.” A nurse hurried over to console her, and in my mind her voice echoed, “First the internet comes … and now music stands are coming off pianos … what is this world coming to … I just can’t keep up … ”

Tip-tap, tip-tap continued Henry’s irregular steps. I played the first note on the piano and, as if on cue, the sounds of a jackhammer joined the ensemble. “Frank”, slumped over in a chair near the piano with a book, raised his eyebrows at me, then Henry, then the elevator shaft, sighed, and then dropped his eyes back to the book.

Three-fourths of the way through, a strong voice greeted my ears and the smell of stale cigarettes filled my lungs: “Hey, thanks for coming over on such short notice we really are glad to see you it’s a shame that they don’t keep this piano in better shape did you see what they did to the legs yeah we come here about once a week my wife and I run this volunteer program” and with no further introduction, the pianist and I continued a (mostly one-sided) conversation while I completed the lower quarter of the instrument… Mabel inched closer and pretended to knit, and a small crowd began to gather for the upcoming show.

Frank returned to his chair when a bassist arrived. Henry moved away from the window, sat in a chair and began his arm exercises with a dozen others while a nurse chanted, “One, two, three, four. One, two, three, four. One, two…” I completed my task, began putting away my tools, and Mabel glared at me and called, “Bleeeaaaarrrrrrrr!”, which meant, “Don’t forget that … thing …. on the table … that you said you’d put back!” Mabel has more going on in her head than most people give her credit.

At this point, I think I’ll be a Henry when I’m an old person. My legs are used to moving. My hands will probably lack the dexterity then to even pretend to knit, and there will be nothing in print that will interest me, unlike Frank. But, perhaps his “reading” was just a facade, and he was really the mayor of all, keeping watch, like Jack’s Indian that finally escaped the cuckoo’s nest.