By the time I was 19, I had hit some pretty high marks as a pianist. I was a finalist twice at the MTNA Wurtlizers, once at the Stravinsky International, and had won the concerto competition at Interlochen four out of six summers. I was not destined for Curtis, but I had logged some hours. Certainly by age 17, I had hit the 10,000 hour mark doing at least one thing: listening to the sounds of our 20th Century tuning system.

Now, the 10,000-hour mark is probably hit by all professional pianists between age 14 and 18. What is unusual though about this profession is that I, like so many, labored to “perfect” these compositions without ever hearing them in the intonations that their composers did. My imagination had been severely handicapped.

The article that I read as a 19-year old was from Owen Jorgenson’s immense Tuning book: “Equal Temperament Was Not Practiced on Pianos in 1885.”1 That means, when Beethoven composed, when toddler Mozart heard a piano played, when Schubert chose a key – in their mind’s ears were sounds with differently-sized major thirds in each key. Their music had vibrato, color, and emotional expression that my music did not.

At some point in your musical development, you went from “learning all the notes correctly” to “shaping phrases” and “breathing”. Your development in voicing went from “right hand louder than left” to passing three contrapuntal lines between hands. But, most pianists never consider vibrato and voicing. Think about all of the other musicians that do – 100% of the time.

Let’s take an exercise of imagination as we superimpose a tuning system that Bach may have codified in the title page of the Well-Tempered Clavier: 2. This has become one of my favorite tuning systems, and, though is only one interpretations of Bach’s signature, it provides us with a pattern that is in keeping with other known methods from Bach’s time: 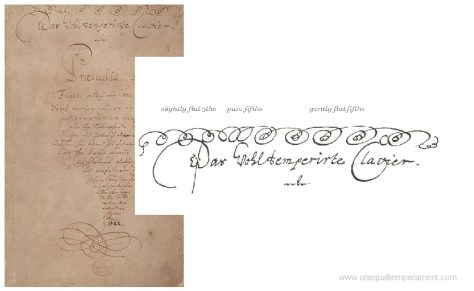 This system has four sizes of fifths: a little flat, a little less flat, pure, and a little sharp, with the set of flat fifths ending on C.

Representing this idea in the circle of fifths, we have the following:

This cryptic graph contains a lot of information, so pay attention. The outermost ring represents the perfect fifth; the middle, the major third; and the center, the minor third. Red colors represent flattened intervals, and green represent wide intervals. You can see that the Bb-F fifth is wide, and the F-C fifths through the A-E fifths are narrow.  Closer inspection shows numbers that represent beat speeds in the tenor octave, and deviation from equal temperament. Further inspection will shows boundaries that mark pure and equal-tempered regions (more detail here).

Now, spend a moment and look at the personality of each key – its combination of fifths that may or may not beat, and thirds that range from nearly pure to bright (or very sad minor thirds!).

This arrangement of the adjustments to the fifths creates a beautifully balanced system. The shape of the thirds is a nice arc from nearly pure at F to a splendid shine at E. The size of the major thirds is about the same on the “flat” (left) side of the circle – but, when accompanied by the flattened fifth, Ab’s Major brightness turns to warmth.

One of my favorite pieces (and a favorite of many) is Brahms 118 #2. The piece is in A Major, which is on the bright side of the spectrum – a steady, strong and bright sound. Most pianists agree that there’s something magical about this piece, and two of the most magical PITs (points in time) are related to key choices. The first PIT is in the form of a drastic key change after a tender opening – a shift from A (a key signature of three sharps) to C (no sharps). The second PIT, and less abrupt, is in the middle section – a shift from F# Minor (three sharps) to F# Major (six sharps) with a single “buffer” chord (C#7).

Now, imagine a soprano singing this tender melody, in a home, in an evening mixed with songs (with words) by Schubert, Wolf, and Schumann. This melody is sad, but sweet (as opposed to sad and tragic). The sweetness is achived by a major third that is slightly wider than pure, so that a little vibrato is felt. But when the first magical section hits, the mood shifts to something absolutely calm – like the water. The storyline becomes “saying goodbye, or ‘see you later’ – not knowing when I’ll see you again – but being so deeply content that our souls are connected when we are apart.”

The B section is set up by a high C# and a low F# – a fifth separated by a couple of octaves. In this tuning system, the F#-C# fifth is pure, absolutely “cold.” To have a distanct, perfect pure fifth sound – especially after the gently pulsing, sweet thirds of the first section – is like the sound of a deep gong from another world. The first part of the B section, F# Minor, shares the bright A-C# third with the opening, so there is some continuity of color to the A section. But when the switch happens to F# Major, Brahms writes a texture change from triplets to quarters, as if the singer is now singing with half-breaths, and plenty of deep vibrato. The storyline has gone to “daring to hope to see you again.”

Take a minute now and recall the keys and personalities of pieces you love. Two of my favorite Beethoven sonatas are the Waldstein (C Major) and Op. 110 (Ab Major). Imagine the contrast between C (nearly pure major thirds) to B and E (very bright thirds), and recall the strength of the opening of the Waldstein in C to the mystical change to E for the second theme. Now imagine that mystical third against a fifth that has an small but steady inward vibrato – and you have a stance of reverence, which is perfect for the opening of 110.

The beauty of unequal temperament is that there doesn’t have to be a “correct” temperament for the music that you are playing. That is to say, don’t get hung up on questions like, “well, which tuning system did Schumann use?” – though there is value in raising the question. Part of the beauty of having a piano is that you can shape the system to fit the music you are playing – and you can actually allow the temperament to guide you through tempo and voicing decisions.

This past week, I shifted my piano from the tuning system above to this one:

I chose this temperament simply because the symmetrical pattern caught my eye. On closer inspection I realized that the thirds are all exactly the same size as equal temperament! So tuning by ear was very easy – set the A, C#, and F pitches as you would at equal, and then adjust your four sizes of fifths from those benchmarks. The result is a presentation that is consistently bright from one key to another, with the fifths providing only a small color change. Because the pattern is really based on thirds, progressions through the cycle of fifths are less compelling – the sensation a omnipresent politeness, which, though I found annoying, cause me to listen to inner voices differently, and refreshed my practice routine.

Dr. Willis Glen “Chip” Miller III’s dissertation, The Effects of Unequal Temperament on Chopin’s Mazurkas, contains 432 listening examples and a guided training for tuners. It is available at www.unequaltemperament.com, along with data visualizations of hundreds of different tuning systems.