Musicians are accustomed to counting to four.  A lot.   Cycles of four-measure patterns are by far the most common pulse. 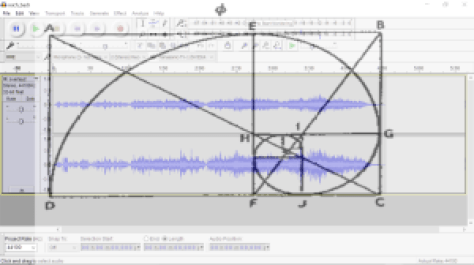 But music, like sound, is not linear.  That is to say: just as the natural harmonics of sound is based on a logarithmic scale, so the rise and fall of music – the invisible “pull” that gives the music its shape – is also logarithmic.  The difference between linear structure and logarithmic content is part of what makes music magical.

The figure above shows a recording of a work in binary (AB) form.  Each of the two parts is repeated, and the four sections are visibly distinguishable.  But where do the points of magic occur?

Bach’s “Goldberg Variations” begin with a [ A B ] song.

Steve Reich, Glenn Gould, Charles Ives, and John Cage may have collectively published something like this: